In the last month, I have visited four major US cities and two small towns. The four cities were San Antonio, TX, Chicago, IL, Detroit MI, and New York City.

In each of the four cities, I spent time in high-traffic tourist areas – #NavyPier, the #Riverwalk, #FordField, and #TimesSquare. I observed people who were at home there, and those who were just visiting. Of the three, Chicago (even downtown) felt the warmest. Nowhere was anyone rude to me or anything close to the stereotypical big city rushed rudeness. But something about #Chicago and the downtown felt more inviting. What I loved about #Detroit was visiting a town outside the city, West Bloomfield, where my husband went to high school. But comparing the downtown experience it felt like a big city that developers had just plumped a bunch of large builds down and moved on. New York, admittedly I spent the most time in.

I stayed downtown near #BatteryPark and #GroundZero. Before and after the two-day work conference, I took the train uptown to Herald Square and then to Times Square. One note about my train experience, 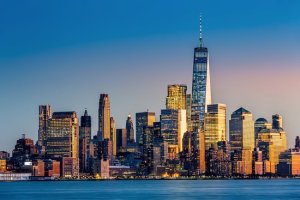 it was clean and air-conditioned and not difficult to figure out., It had all the kinds of people you would expect-the crazy talking to themselves type, young professionals, and tourists. My goal was to look as little like a tourist as possible. I probably failed miserably, but I felt comfortable enough even reading a magazine while I road back to the hotel.

Many of the retail options were the same as we have in Louisville (except Bloomingdales and Tiffany’s), every store was bigger, louder, and had lights and sounds coming from all angles. Not to worry, I managed to make a few purchases😊 despite noise and crowds.

I bought a hotdog from a street vendor and stopped to look at the “genuine maybe some kind of designer” purses. I walked from Times Square to Rockefeller Center, and on another journey walked Herald Square, and then the financial district. New York truly is a representation of the melting pot America has been described as. I heard many languages, saw families, couples and individuals of all shapes, sizes, and nationalities. All moving in tandem with each other. All accepting that it was crowded and loud, but no one pushing or shoving to get to the front of the pack. Amid the volume of sound and people, there was a peaceful co-existence.

The two small towns I visited were Kinsman, OH, and Stillman Valley, IL. Both very quiet towns. Both primarily farming towns. Not a lot of diversity in either one, but still many colorful people to observe and meet. Both had a limited number of restaurant choices, but the food was outstanding.

In Stillman Valley, we went to Fritz’s Wooden Nickel. The menu boasted everything from seafood to steak. I stuck with the cheeseburger. Walking into the dining room felt like we were invading someone’s family reunion. The rumble of conversation, while all in English, was warm and comfortable. In Kinsman, we had the opportunity to eat at one of their nicest establishments, The Peter Allen Inn, and one of their 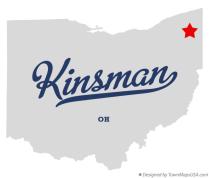 most down-home, Times Square Restaurant where they really did know names when the locals came for breakfast. Both establishments were locally owned, and the owners were mingling among the diners. Conversations were around the amount of rain, some flooding, and the challenges farmer were having with not being able to put the corn out, or it being too wet for it to grow.

Traveling in and around both of these towns, I wondered about the people who were born, raised, and built their own families there. How many of them only knew America from the perspective of their corner? Of course, I could ask that of the New Yorkers, or Texans I encountered as well.

When you ask the citizens of these six cities what it’s like to live in America or to describe America, how different their perspectives would be. One loud and busy most hours of the day or night, the other steady, peaceful, and little changes day-in and day-out. Both have their share of challenges.

The farming families are growing food that will be shipped across the country; including the big, fast-paced cities like #Detroit, #Chicago, and #NewYork. Similarly, it’s the industries in these major cities that provide the vehicles, financial options, and raw materials that the farmers and those in small-town America count on every day.

I’m headed home now to Louisville, Kentucky. Our microcosm includes all the things these cities have. We have sports (semi-professional), the arts, many people of different languages and cultures who have come to our fair city (metro of about 1 million) to build a life, raise a family, and be a productive part of society. We have our challenges of a river that floods twice a year, homeless, a fussy government structure, and the list goes on to parallel many other places. But it’s home. It’s where I was raised and have chosen to stay. But I like to visit other places and learn something about how others live. It’s these adventures that broaden my capacity to empathize with those who are challenged by life and appreciate very different points of view.

P.S. As I write this post, I’m on my way to #Atlanta, Georgia, another great American city! We are headed to the Mersedes-Benz Stadium for the Drum Corps International Southeast Regionals (#dci). We will be cheering on #PhantomRegiment!