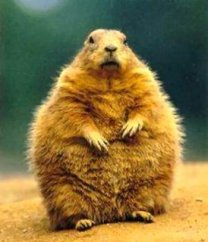 Just as the sun beam was creeping in the hole of Phil’s family home there came an obnoxious thumping. Phil’s mother ran through the tunnels of their fourth generation sub terrain home screaming for Phil to get up and find his scarf. “Today is the day!”

Every year it was the same for Phil, whose given name was Ralph after a big family fallout, but that’s a different story. Phil was the fourth generation groundhog who the handlers of Punxsutawney, Pennsylvania came calling on to tell them his vision for the end of winter. Phil heard his mother, but rolled over. “Really mom, can those humans not look at a calendar?”

Pulling the covers back and nudging him up, his mother wrapped the scarf around his thick neck. “That’s not the point Phillip. This is our family legacy, like your father, your grandfather and your…” Rubbing his eyes and shaking himself awake Phil waddled toward the thumping sound. “Yea, I know and my great grandfather who came over on some big ship, half-starved when he arrived to a better life in America.”

“Phillip, stop that. Be proud of our family and go out there and tell these humans what you see.” With a smirk. “Or don’t see.”

As Phil poked his head out of the entry, a large gloved hand reached down and swooped him high for the thousands to see. The man was wearing a funny hat. Maybe I’ll get me one of those for next year.

The crowd grew silent as they watched the rodent sniff the platform. Would he stay a while and declare a short winter? Or would he see his shadow and scurry back into his hole? Phil gave the people a few minutes of suspense and strongly considered zipping back into his warm, safe cavern. But then something caught his eye. Something no one else would have noticed.

Across the park just outside the gathering of fans, who didn’t realize cheering his name would sway him, were three of the cutest female groundhogs Phil had ever laid eyes on. They were chippering amongst themselves. True motivation to stay out for a while and enjoy the scenery. Knowing the three lady friends were watching, Phil stood up on his hind legs and sent them a view of his abs of steel that only female groundhogs could appreciate.

The crowd went crazy the man with the tall hat grabbed the microphone and announced his interpretation of Phil’s prediction that spring would in fact come early this year! The band played and the people hugged. Phil took advantage of the distraction and scurried off the platform and hid.

Will Phil stay close and meet his three fans? Will his mother ever quit rehashing the groundhog story? Will spring really come early or arrive on March 20th as always? My friend, these are questions I will leave you to ponder. 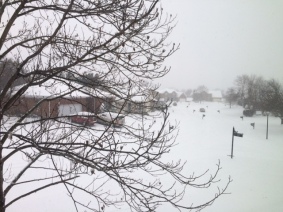 It’s January 20th and we are finally getting a decent snow in Kentucky. Yes, I know it’s an inconvenience and people get all weird about driving and getting out in it. But it is so amazingly beautiful. And quiet. There is something different about the quiet that falls with snow. Snowy days are a great respite from the dreariness of winter. All the plants that are dead and dormant waiting for spring now glisten under a blanket of white.

For those with the list of snow day projects, will you mark something off your list? Or will you gather up in a big chair with hot tea and a book?

Recently I spent my post space and time begrudging our horribly oppressive gray winter days here in Kentucky. As of this past Monday, not so much gray as white has shown up. Snow!!! Close to a foot of snow fell blanketing our brown icky dead yards and wrapping the dead leaves on the trees in a beautiful shawl of white, cold, fluffy stuff.

I know that for those who have to get out in it, this weather event is a hassle. For those who work outside the home and need to find snow day childcare, this snow event adds to the ‘to do list.

For me, this brutally cold spurt has provided a welcome break in the weather. I invite you to look outside and notice the textured snow drifts or the crystal frozen sparkles in the sunshine. It’s beautiful!

What now hides beneath the snow are the buds, the hope for spring — 28 days and counting… 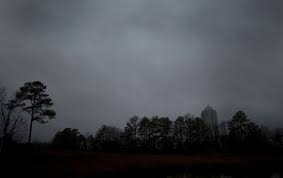 We haven’t had any significant snow since November. The winter grey that Kentucky usually experiences in January and February moved in early this year — December. It has out-stayed its welcome. The good news that in my fight to keep my mood from falling into a putty-colored state, I’ve exercised more. Just to keep moving, there have been a couple of home projects marked off the list.

The bad news is that my electric bill has increased in my attempt to turn on enough lights to keep the dreariness out of the house. About every three days the sun comes out. It makes me want to shove the dog out of the single beam to soak up enough to carry me through the next several days of dullness.

Our friends in the Northeast have been hammered with snow and ice. Many of them are probably wishing they could see the dead grass in their yards. Know that my heart goes out to them. I wish Mother Nature could have just split the difference this year so we could share in some of the snow fun. While I may be guilty of doing the “snow day” dance for the schools to close with my high school, for the most part I’ve graduated from snow days and look forward to enjoying a beautiful snow that can break up the winter.

As of this post there are 39 days until spring. Anything is possible with our Kentucky/Ohio valley weather. There still may be a good snow in our future. In the meantime, what are you doing to ward off the winter blah?

Typically in Kentucky January and February are dreary, cloudy and cold months.  They are long and like walking through taffy to get to spring.  This year a winter polar blast has come to visit.  We are in the midst of very cold days and snow!  True to form, people are starting to grouse and wish this six-week visitor would pack its ice cycles and go home.

Beyond the initial mess these winter storms bring, the road crews have done well to get the streets cleared so being out and about lends an opportunity to experience the winter wonder land.  It’s amazing to see the sleeves of ice

coating each little limb and stem of the trees and shrubs.  I feel for our old pine tree with the burden of ice that pulls the branches downward from its 60 feet height.  But the sun is out today and is helping to melt away some of that load.  No doubt the strength of 20 plus years will sustain our wooden friend.  The sunshine is probably the great redeemer in this long winter visitor.  If you followed our dog around all day you would know the places in the house that the beams of light invade and remind us that warmth is available.

Yes, warmth is available and more is on its way.  In the next few weeks, whether Mr. Winter has departed or not, the early spring flowers will begin their reign and the seasonal tug-of-war will begin.  I like to think that right

now beneath inches of snow and ice, my flowers are sleeping and building their strength.  Their time will come and when it does those beautiful and graceful buds will burst through whatever lays above.

Weather is wonderfully unpredictable.  But we can count on the seasons to change.  We can count on the snow and ice to melt and spring to arrive.  It will show up in all its color and glory.  Keep watching for it, but don’t miss the beauty that has beaten the winter doldrums.