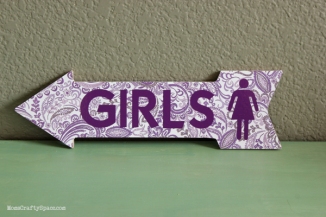 There is an interesting social phenomenon among females that all these years later is still a mystery to me. The bathroom buddy system. Do I need to go to the bathroom? I’m pretty sure before middle school I hadn’t been asked that since I was two-years-old. It was a significant life-lesson for me to know the question had nothing to do with having to USE the facility. In middle school and high school, it’s not uncommon to see a gaggle of girls all going to the bathroom together. If you were female and not in the group going, it is likely you were the subject of conversation while the girls were using the facility, checking make-up, and brushing hair. At the end of a meal or at a given point in a social gathering one of the girls would say to the others, “do you need to go to the bathroom?”

The high school I attended (Christian Academy of Louisville, Rock Creek campus), had a girls room right off the cafeteria. This was a bathroom (single user) perhaps as big as 7′ x 5′. It included a sink with mirror, a toilet and, a radiator. While sharing “all the news on the gossip chain, we had a method for rotating turns in front of the mirror that included at least one of us sitting on the radiator, and someone standing on the back of the toilet. Of course, no one actually voided their bladder. This trip was all about primping and news gathering.

In college, the bathrooms got larger but were still a gathering place for the exchange of gossip. Girls still went to the bathroom in groups. There were more mirrors, sinks and now we had stalls for taking care of other personal activities. This is when the whole odyssey to the restroom changed for me. I still took the journey to the restroom with the girls, but it became a little weird to me to talk over the stalls. I don’t know, it just seems weird to me to have a normal conversation while doing that which should NEVER be shared with anyone. No one. That’s a little too intimate for me.

For me, the need for pairing up to go to the bathroom ended with college. If I’m the odd person out and become the topic of conversation, I consider it an honor. Spoiler alert, I’m not that interesting. Don’t waste your time. Part of this maturity may come from me really not caring to participate in the commentary of wardrobe, behaviors, parenting skills, or evaluations of the date someone came with. One of the most awkward social moments I’ve had as an adult is when another female in our party has stopped conversations to ask me if I wanted to go the bathroom. Not to embarrass them too much, I simply replied, “No, I’m good. Thanks.”

If I happen to run into someone coming in or at the mirror, I may chat. But sorry, I’m not having a conversation over the stall wall. Oh, and more than likely I won’t participate in epic gossip.